My Sunday paper this morning... 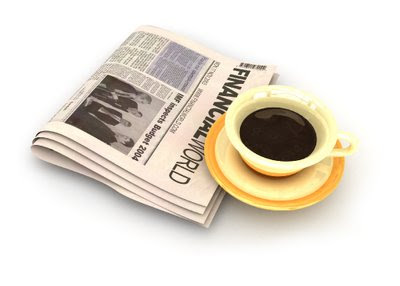 So I mosey down the drive and pick up my Sunday edition of THE BIRMINGHAM NEWS this morning. First thing I notice is how light the package is. If you take out inserts, the thing is really no bigger than the Friday paper used to be...before it shrank.
Then a friend of mine forwarded me the following news story:
The New York Times Co. said Thursday it is suspending its quarterly dividend in a move to preserve cash, as ad spending continues to decline. The suspension of the payout comes after the company slashed its dividend to 6 cents from 23 cents in November.
"The decision provides the company with additional financial flexibility given the uncertain business outlook," says Arthur Sulzberger, Jr., chairman.
That's tough news for the Sulzberger clan, which has been living quite well off the Times' dividend for a long time. And it is a sign that the paper's cash crunch hasn't been eased just because it was able to secure a high-interest loan from Carlos Slim last month.
In January, the Times company, which publishes the NYT, Boston Globe, the International Herald Tribune and 16 other daily newspapers, said its fourth-quarter earnings plunged 48% and online sales fell for the first time. The results still beat analyst estimates. As of last fall, the paper was insisting that it wouldn't lay off any of its 1,300 newsroom employees. But things have only declined since then.
And I read in the trades last week that one major radio company is expecting revenues from advertising to decline 50% this quarter over Q1 last year. 50%!
Much of this is recession-related, of course. And the economy will turn around eventually, even as it gives those of us with tentative plans to retire in the next few years a severe case of heartburn. But there is more going on here. The newspaper-in-print business is D-E-A-D. Traditional over-the-air radio is a step away from life-support with more people than ever simply giving up and turning in their licenses to the FCC.
Does that mean newspapers and radio stations are going away as sources of entertainment and outlets for advertisers. NO! I don't think so. At least, not necessarily so. People still want news, commentary, entertainment, companionship. And who better to give those things to people than newspapers (who have staffs of reporters who can write well and ways to gather news, commentators who people want to read, and sources it would take other media years to develop) and radio stations (who can still develop talent people want to listen to, can put listeners on the air with a flick of a switch, who can still create buzz about a new artist or a new collection of songs [remember when we called them "albums?"] by an artist)?
But will they adapt. That IS the question. Here are ten predictions about the future of over-the-air, terrestrial radio from the oft-quoted Mark Ramsey:

1. Radio will recognize that to be more attractive than other sound-alike alternatives - to retain more of its existing audience – it must count on more than habit, convenience, familiarity, ease of use, and the often-proclaimed almost-universal reach of the medium, since all those advantages are transitory.

2. The advantage of "local" will diminish in direct proportion to the disappearance of local content on stations - and here I'm talking about the local content between the songs.

3. The formats which rise will be the ones catering specifically to audiences who are less tech savvy or the old dogs who don’t wish to be taught new tricks. Look for Spanish language radio to be the big winner here along with anything targeting aging Boomers.

4. Ratings will decline in importance as advertisers make decisions based on accountability and results rather than on how many ears a station reaches. As more dollars that would have gone to radio head to destinations outside Arbitron's sphere, stations will cancel their Arbitron deals and never look back.

5. FM stations will move in one of two ways: Either stripped of anything but music (low-cost proposition) or stripped of music and focused all Talk or other non-music entertainment (high-value proposition). Radio will function more like movies: Cheap Indies with low costs and lower profit dollars (but higher margins) and expensive blockbusters with high costs and higher profit dollars (and lower margins).

6. There will be a renaissance in national non-music programming, assuming somebody somewhere in or out of radio bothers to look for it and take a chance on it (Jerry Bruckheimer, where are you?). When these shows are launched, they will launch across dozens of stations at once, not be introduced organically one station at a time. The organic approach to talk show growth is over. Success will depend on mass exposure and mass audiences. Introducing a new show in 100 markets at once multiplies the impact that show has in a world where listeners are no longer bound by their Metro Survey Area. NBC will not be launching the new Jay Leno show one market at a time, and neither should you. Further, Non-Music Radio will not be limited to "Talk" exclusively, let alone Conservative Political Talk.

7. Stations will look to their digital strategies for their bread and butter. Broadcasters who can't keep pace with digital opportunities will be out on the street. The tower will become the marketing tool for the digital strategies, not vice versa. Digital dollars will exceed over-the-air dollars in part because there will no longer be such a thing as dollars which are only "over-the-air."

8. Power will flow to the talent and to the owners of that talent's distribution. No longer will we expect a talent to do three or four hours, five days a week. We’ll see shorter, less frequent content – repeated more often. And we'll see more flavors of content stretched across more distribution channels.

9. Much of the non-music content on TV will be simulcast on radio, thus extending the distribution for TV content at a comparatively low cost and reframing many stations as distribution channels for TV - without pictures. CNN, FOX, MSNBC, E!....It will all be on a radio station near you.

10. Stations will recognize that their primary value is in their audiences - each one with a name, an email address, and specific wants, needs, and behaviors - all of which can be noted and tracked (within the constraints of privacy concerns) such that radio can treat listeners as individuals rather than faceless, nameless "cume." This way, stations will connect the right listeners with the right marketers and provide value that vastly exceeds anything radio has ever provided before and anything Google or Facebook can match on a local level.

While I might take issue with minor points above, I totally agree with the mass of what Mark is saying. Someone could do a similar top ten list for newspapers and a few other traditional media.
Trouble is, I don't think anybody who is in a position to heed all these dire warnings is paying any attention.
My trips down the driveway to pick up the paper will dwindle. I suppose I'll have to get my exercise elsewhere.