This WILL Hook 'Em!

A lot of us who are passionate about the hobby of amateur radio have been wracking our brains, trying to figure out to attract today's younger folks into the hobby.  Our local organization, the Amateur Radio Advancement Group, has this as a major reason for our existence and have some exciting things working in this regard.  But we continue to hear from the naysayers that claim that with Facebook, smart phones, video games, and YouTube, there is no reason for kids to even consider such an archaic hobby as amateur radio.

"Phooey!"  I say.  Granted, it's a different day and time and there are many distractions I did not have way back in '61 when the radio bug bit me so hard.  Heck, we were on a five-family telephone party line and only had three TV channels to watch.  But I am convinced that despite this, there are many, many technically inclined youth out there who would love what today's ham radio has to offer.  And once they find it, they will enjoy it just as much as the rest of us have...and still do.  It can even lead to a career for many of them.  A technical career, and Lord knows, we need as many young Americans following that path as we can get.

And I believe the American Radio Relay League (ARRL), the national membership organization for ham radio, has finally hit all the right buttons.  Along with some very talented amateur radio ops, the League has just released an 8-minute video that strikes all the right cords.  There is a very vigorous "do it yourself" movement sweeping the country these days, made up of people who enjoy creating things and then using them...to learn, to have fun, to achieve a sense of fulfillment. 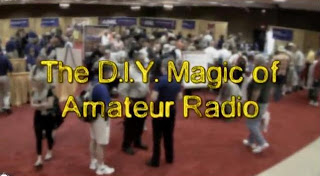 ﻿
Ham radio fits perfectly into that movement on so many levels that it is dizzying.  Watch the video and see if you agree with me.  If you can, show it to a teenager, somebody in his or her 20s, someone who enjoys making things with their hands, regardless the age.  Then watch the light come on!

(Congrats to the ARRL, the producers, and anyone associated with this video!  Very well done, guys.  You can see the video at the link above or by clicking HERE.) 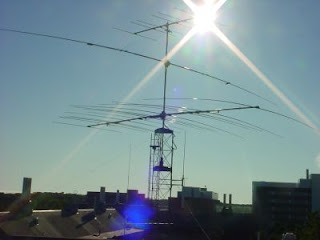 For a hobby that is dying as a result of the white-hot growth of all other more sexy technology, amateur radio seems to be holding its own.  At least when you look at the latest figures from the Federal Communications Commission (FCC).  The news that over 700,000 people are now licensed as ham radio ops in the U.S.A. confirms my earlier stated opinion that predictions of the demise of the avocation are seriously misplaced.
Frankly, those who say smart phones, Facebook, and all the social networking are eliminating the appeal of a hobby that got its start with spark gap and Marconi are W R O N G.  They miss the point of our hobby completely.  Yes, I can dial a random number on my Samsung Galaxy and, maybe, get an answer.  But what's my likelihood of striking up a conversation with someone who shares common ground with me?  I can tell folks on Facebook that I just passed mile-marker 100 on I-59, but is it any easier than making the same announcement on the 146.88 repeater in Birmingham?  Will the people be equally unimpressed with the update or not?
First, I didn't build that Samsung device.  Nor did I design and install the antenna it uses.  I had no choice of the mode I used to reach out to the random victim on the other end.  If there was a choice, some computer at the cell site made it...3G or 4G?  When I sit down at my radio desk at home or flip on the multi-band, multi-mode radio in my truck, I have many, many choices I can make, and the result is what kind of experience I am likely to have.  Plus I am employing much more gained knowledge than it would ever take to punch in a number on a phone or click the Facebook link. 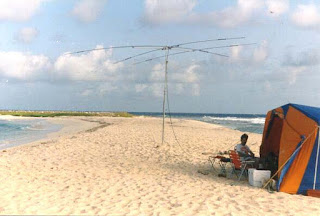 I might decide to go after the station in Thailand that the DX cluster says is operating on 21.009 mHz.  That would obviously be on CW, so I turn my rig to that band, frequency and drag the Morse paddle over.  I also know from my propagation maps that I have a chance of hearing him at that time and frequency.  Yep, there he is.  Which antenna do I use?  The big loop I built myself?  The trap vertical I installed in the backyard over a ground radial system I concocted?  The hexbeam I built from scratch?  Do I turn on the amplifier or try to talk with him at a relatively low power of 100 watts?

The hexbeam gives me the best signal received (though the loop is very quiet and I can hear him slightly better above the natural atmospheric noise) so I make a small adjustment in the bearing I'm beaming and decide to try with 100 watts...about the same as a light bulb.  I could do like many do and see if I can reach him with even less power, reveling in the challenge of such a thing.  Next I determine where he is listening by hearing the other stations with which he is conversing, split my transmit and receive frequencies, and begin sending my call letters when he finished up with the other guy.  I smile broadly as he responds to me and tells me "good morning," even though it is afternoon where I am.  He is literally on the other side of the world, see?  We exchange signal reports, chat briefly and finally send polite thanks to each other for the "QSO," and I sit back, contented.

It may be hard for others to understand, but there is no way I could get the same amount of fulfillment and satisfaction by simply dialing a telephone number in Thailand and trying to get someone who answers to talk to me.  Or by randomly "friending" a total stranger on Facebook.  Was it because I use a station I put together myself?  Not built from scratch--though that certainly is an option--but hooked up and put on the air the way I like it.  Was it that I used propagation knowledge that I gained from studying and observing?  That I employed the very efficient Morse code that I learned and have used to the point that I'm pretty good at it?  Was it that the fellow in Thailand and I had common ground and talked about stations, antennas, jobs, and the like?

Yes, it was all that and more.  I could tell you about many, many other fascinating chats I've enjoyed, amazing people I've met, countries I've learned about, all on the radio and not in chat or IM or LinkedIn.  Like the fellow in South Africa with whom I talked for almost an hour the other night.  Or the gentleman in Ireland who is a big NASCAR fan and that I ended up inviting to stay with us if he ever makes it to a race at Talladega as he hopes.  (Think I would have done that with some weirdo who answered my random cell call?)  Or the friends I have from Costa Rica to Wisconsin to the other side of the planet who I run into on the air from time to time and always enjoy conversing with.  Or the fellow on the western coast of Australia who operates by remote control (via the Internet) a station in the U.S. Virgin Islands and is always a source of fascinating conversation.  I could also make a long list of things I have learned, technology I have been introduced to, geography I have had made real and tangible to me, storm-spotting I have heard real-time that DID save lives, all through amateur radio. 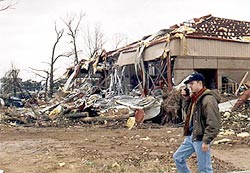 That's why our ranks continue to grow...maybe not at the same rate as the general population...to record levels.  When you can do all the things I can do on my ham station on a cell phone or via Facebook, let me know and I'll consider giving up that desk full of gear.

Meanwhile, I'll just stick with my ancient, out-of-date hobby, thank you very much.