THE DIGITAL STORY OF THE NATIVITY

I don't think anything says "change!" any better than this. Enjoy...

Fun with graphs and charts

Want a really cool way to demonstrate the progress of man over the last few centuries.  Here it is.  And it's fun!

See.  Numbers can be kind of cool.  Plus you can see easily that everything is NOT going to hell in a handbasket!

A few words about criticism

Someone once said, "If you believe the good reviews, you have to believe the bad ones, too."

I totally agree.  After a long career in broadcasting and now, with over twenty books in print, you can be sure that I have seen my share of both.  When my first novel was published, THE FOREVER SEASON, I could hardly wait for that first round of reviews.  Based on my very experienced editor's feedback, I just knew they would be uniformly glowing.  Not so.  Both Publishers Weekly and Library Journal, the two sources in which those in the publishing industry put the most stock, were awful.  Never mind that few potential readers ever see these--unless the publishing house yanks them out as blurbs when they are positive and puts them on covers and press releases that zoom out to the masses.  And never mind that we got scores of other reviews that were absolutely wonderful and never--to this day--ever received another negative one.
You see, those two highly subjective reviews caused the sales and publicity staff at St. Martins Press to totally lose interest and move on to other books that were not roasted in PW and LJ.

Now, jump ahead fifteen years.  Anyone with a computer and an Internet connection can post reviews on such sites as Amazon.com and Bestreads.com.  It does not matter if they have read the book or not.  Or whether or not they like the way the author combs his hair.  They can give glowing reviews for no good reason or completely pan an author's work, based on any criteria they want.  And people considering purchasing those books can't really tell which reviews are helpful and which ones are garbage.
Is this a good thing or a bad thing?
I admit I check travel review sites when I am booking a hotel, and I read the customer reviews and consider their rankings.  In my ham radio hobby, if I am considering a purchase, I go to eham.net and scroll through user reviews, and take that into consideration.  I even take time to post reviews on those sites in an effort to be helpful to others, and try my best to remain objective.
I'm sure hotels, restaurants, and amateur radio equipment manufacturers--among others--have developed thick skins.  I wonder how many even bother to check the reviews they are getting on these sites.
It is a little tougher, though, for folks like authors.  We bleed and sweat to make our works as good as we can make them.  Then, we have some uninformed or prejudiced yahoo call our baby ugly for no good reason!
Hey, I'm a big boy, and I know what I do will not appeal to everyone.  Constructive criticism is always welcomed.  So is fact-correcting.  But when I see "reader comments" that are scathing, based on purely arbitrary opinions, it bothers me.  I have one fellow who has posted lengthy diatribes on several of my World War II submarine books (I have resisted replying to him on the actual sites where they appear because I don't want to legitimize his rants, but I do appreciate others who have commented on his stuff.). If his points were consistent or made any sense, I would accept them and move on, but it appears he has an almost personal axe to grind.  Truth is, he is so far off base, it doesn't hurt my feelings at all.  But the trouble is, I know the comments could negatively impact book sales.  And that does bother me on several levels. 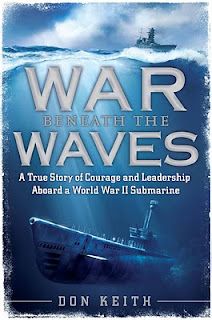 First, he apparently has not read the books since he makes mistakes about names, dates, and many of the facts.  He chides me for not giving more detail and then makes an issue of the amount of detail I give in other areas.  He wants footnotes and sources like a scholarly work, not understanding that these books are not intended to be that at all, but human stories of real people in extraordinary circumstances.  And they are not written as historical record or analysis for scholars, but for people looking for good, real stories that just happen to be true, and may not know much about WWII history or submarines.  I only try to tell enough to put the events and personalities into context.  He rants about my boring style in one sentence then talks about how the good writing style masks a lack of scholarly historical analysis in another.  He also seems to think that my not being a former submariner prohibits me from being able to tell these stories about submariners.
Yes, a few factual errors creep in...some my fault, some not...in a book as full of facts as these are.  It always galls me when a book typesetter or line editor accidentally changes a date or number.  We just corrected a fewof those in the upcoming paperback release of WAR BENEATH THE WAVES. These manuscripts have had many eyes of well-informed people on them, including men who spent a large portion of their lives on submarines did not catch them and others who actually lived through what I write about.  And, by the way, none of them are major flaws at all.  (The one I keep hearing about is a wrong number I gave when converting knots to miles-per-hour when talking about the speed of a Japanese destroyer...and we still don't know where that bogus number in the text came from...I know the formula!)
So I guess my question is, how do we deflect misdirected arrows of criticism when everybody with a keyboard has a quiver full of arrows?  Or should we?  With the hotel and amateur radio gear reviews, the sheer volume of input allows us to quickly cull the outliers--pro or con.  It's the same concept as Wikipedia, where incorrect info is immediately corrected by all the army of people looking at it.  If a ham radio antenna has a 4.8-out-of-5 average rating after 200 reviews, I am probably not going to pay much attention to the one guy who gave it a zero unless he has a darn good reason.  However, on most books with limited sales--like mine--one or two negative reviews carry a lot of weight when Amazon starts adding up the stars.
Just like Publishers Weekly and Library Journal.
Don Keith N4KC
http://www.n4kc.com/
http://www.donkeith.com/
www.facebook.com/donkeith
www.twitter.com/don_keith
Posted by Don Keith N4KC at 11:06 AM 2 comments: