Look, I am not necessarily picking on the radio industry trade Inside Radio again.  Or my old friend, Pierre Bouvard, who is quoted in an article in today's email/website edition of the pub.  But somebody needs to once again question their incessant attempts to find blue sky while ignoring the falling sky in the biz of commercial, over-the-air radio.


Ratings: Radio Stable, While TV Stumbles the headline proclaims. "Stable" based on an analysis of Nielsen ratings for both TV and radio by some outfit called MoffettNathanson. Other than wondering if the space bar is broken on their keyboard, I also have to wonder exactly how they come to that conclusion when comparing two entirely different media with drastically different methodology employed to measure viewership/listenership.

See, Nielsen measures much of the other sources of video that compete directly with over-the-air TV.  Things like cable, satellite TV, and the like.  They don't measure most of the stuff that is pulling precious ears away from Rock 107.  Not Pandora, iTunes, or similar.

Notice, too, that the article uses millions of people to show TV's gargantuan loss to non-broadcast sources while employing rating points for radio's almost infinitesimal drop year-over-year.  Frankly, I don't know how many actual listeners radio lost because I don't know how many listeners there are in Nielsen's 48 markets in which the PPM device is used.  Nor does the article tell us what demographics were down in radio as they did when crowing about TV's landslide.

"Radio suffered no such tumble," they note.  OK, broadcast TV lost 600,000 viewers aged 18 to 49.  How many million did broadcast radio lose in that same age group?

Another article in the same day's email digest is a bit sobering, too.   The typical (median) over-the-air radio station--including all those that boast of being all-news or news/talk--has a news staff of...ready for it...one!  One person!  One human being!  The average of all stations has ONE person on its news staff.  And the study quoted notes that in almost 30% of stations that have a position with the title "news director" the job is not even full-time.

Guess why fewer and fewer people depend on local radio to keep them up to date on breaking news.  The medium has gleefully cut staff and is more than happy to allow local TV and web entities with their news apps (along with Twitter and other social media) to have those potential listeners...on a sliver platter.

Shut up and play the hits!
Posted by Don Keith N4KC at 4:57 PM No comments:

Do you ever wonder how many people decide not to not pursue new technology, a different pastime, or other avenue of interest simply because they are stymied by the unique language that has developed around those areas?  Whether on purpose (to block others from entering the "fraternity") or accidentally (just because the newly-developed area is complicated), I firmly believe the jargon that develops among "insiders" is a top deterrent to those who might otherwise adopt or enter.  In too many cases, that is a loss not only for them but for those who are already a member of the particular technological brotherhood.

Prime example: my chosen hobby of Amateur Radio.  Not only has technology evolved in the avocation since it started 100 years ago, creating a brick wall of terminology, but those who have joined the ranks along the way also developed their own gobbledygook, just as most areas of human endeavor do.  It's inevitable.  Ever listened to a couple of fishermen talk?  Or folks devoted to golf?  It is a foreign language!  And a tough one for the newcomer to adopt.  Maybe so tough the potential entrant says, "No, thanks!" 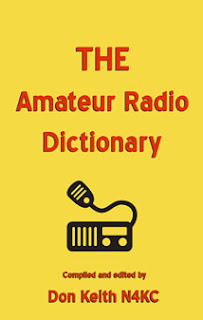 I'm convinced that is one of the reasons many hesitate to jump into a hobby in which they would almost certainly find a great deal of satisfaction and opportunity to learn.  Maybe prepare for a new and exciting career in a related field or simply learn to be a better communicator, a skill that is invaluable in any job or just in life in general.

And it is also why I have written two new books to help them overcome that perceived obstacle...among others.  Still, even I was amazed at how many terms I collected as I compiled one of them, THE Amateur Radio Dictionary.  And equally amazed that nobody had attempted something on this scale before.  Yes, there are some simple, incomplete or poorly-written Amateur Radio glossaries on the Internet.  There are also quite a few electronic dictionaries, but they have far more info than the average new Ham would ever need or the definitions are way too complicated.  Or they are written very badly.

By the time I was ready to publish the first edition of the dictionary, I had collected over 1200 terms and more than 1600 definitions.  Even though I have been a licensed and active Amateur Radio operator for more than 50 years, I ran across quite a few terms with which I was not familiar and others whose definitions were not clear to me.  Now, I am confidently marketing the book as the most complete glossary of Ham Radio terms ever compiled.  I believe I am safe in that claim.  And in using all caps for "THE" in the title. 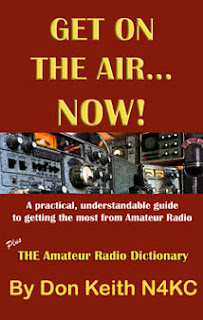 The other new book, Get on the Air...NOW!, deals not only with overcoming the jargon but also the other discouraging things a newly-licensed Ham might encounter as he takes up the hobby.  Things like putting together a station that will give a reasonably good on-the-air experience.  Erecting antennas that will actually work but not cause the neighbor's garage door to go up and down like the dang thing is on crack.  Or knowing what to say and how to say it in that first on-air contact.

Again, I see these initial complications as a deterrent to so many who would truly enjoy the hobby if they could only get past those initial hurdles.  Even if they are not nearly so daunting as many imagine them to be.  (Note that I handled the jargon part in the second book by including the complete text of THE Amateur Radio Dictionary as part of the Get on the Air...NOW! book...at no additional charge.) 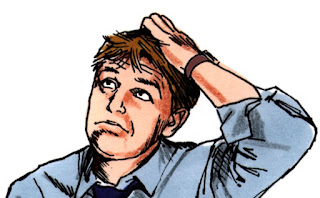 Now if I could just get somebody to do a book on the convoluted verbiage encountered when one tries to set up a home computer network or figure out how to build a web page that doesn't make a smart phone go into hiding.  Or become a scratch golfer or catch enough fish for supper.