Are we so involved in chronicling our lives that we are missing living them?

I often tell my wife that we watched our kids grow up through the viewfinder of this or that film or video camera. And it is not far from the truth. Then I receive this spot-on correspondence from Becky Robinson of the company Weaving Influence.

Amid all the celebrating on this July 4th...


It is not boastful nationalism to call attention on this day to a bold, successful experiment that has actually made this planet far better than it would have been otherwise. History has been littered with brutal empires, despotic dictators, and corrupt royalties that dominated practically all of the world's people, and in the 1700s it appeared that would always be the case.
Then, a brave group of very bright men took ideas from the ancient Greeks and applied them to a "new world" that at the time was ruled by a distant king as part of a far-flung empire. After boldly declaring that men (and women) should live free and determine their own fate and fortune, that men and women were free to live, worship, and thrive as they desired so long as they did not infringe on the rights of others, and that this new country would employ a democratic form of government, governed by the people and not a "divinely-appointed" king or queen or a dictator, the United States of America was born...not to dominate the earth, not to build empires, not to threaten with its might but to offer other people across the globe a powerful, shining example of what could be. That experiment gave hope for freedom and prosperity through democracy and an economic system that, together, would raise the living standards, recognize individual rights, and provide an existence not then available to most of the world's people.
Yes, there have been rough spots and necessary change (slavery, civil war, women's rights, civil rights), but it was that very form of government and rule by the people that made those vital adjustments possible...if not always painless. It is true that democracy can be messy. Certainly a distant king or a brutal dictator or a socialist regime would have never allowed such. Government is decidedly neater and quieter under such iron-fist rule. And even as so many bemoan our "division" or our "economic inequality," we need to take a moment to reflect on how wonderful it is that we can even debate such points without being arrested or censored. But also remember that because of those brave men and our persistent form of democracy and thanks to our powerful free-enterprise system, we continue to raise the standard of living not only of our own citizens but of people around the planet. And that everyone can see that they, too, can demand their own rights be granted. Nobody is storming the borders of Venezuela or North Korea or Iran, trying to get into those countries.
And that's just another reason we should shoot our fireworks and eat our barbecue and celebrate this day with renewed vigor. Because this noble experiment continues to demonstrate the correctness of its ideals and the power of its ideas, We may never get it totally perfect, but it has certainly worked out well so far for our country and to those others around the world that emulate it. Even as we continue to try to get it even more perfect, we should acknowledge how great we have it. We should vow to better educate ourselves, be open to hearing opposing ideas, remain open-minded and fair, evaluate our representatives on ideas, not personality or promises, and do everything we can to continue the intent of those bright, brave men who started this whole thing. We can and we must. I'm confident we will.
To me, that is worth celebrating! 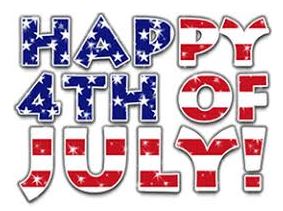