AM broadcasting continues to fade away...literally and figuratively

I've blogged here often about how AM broadcast radio is dead, dead, dead, and weak efforts by the Federal Communications Commission to save it are futile at best and laughable when you get right down to it.

Further proof? See this post on Facebook, decrying the fact that a legendary, high-powered AM station in Chattanooga, Tennessee, WFLI, is going dark...the broadcasting term for pulling the big switch, signing off and not signing back on. 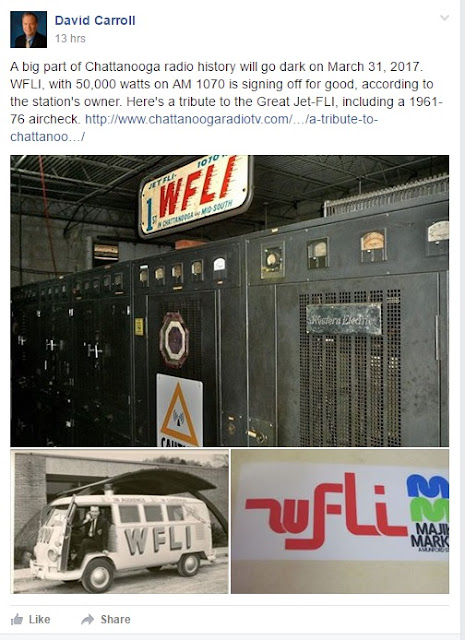 How is the FCC trying to overcome the obvious, the fact that rapid technological change and its inherent flotsam and jetsam has left AM broadcasting in its wake?  By offering AM station owners weak, ineffective FM stations on which they can re-broadcast their AM programming and allowing them to make minor, subtle changes to their on-air signals.

Neither will work, of course. FM translators are just cluttering up an already crowded FM band and those that do manage to find an audience are only further diluting ratings and listener-ship, making it more difficult for anyone to make a living. The AM band is also rife with man-made electrical noise, making stations almost unlistenable in urban areas. In many cases, the real estate on which the AM stations' towers rest is worth far more than the station as a whole.

But the main issue is one the FCC cannot possibly solve. BROADcasting as an advertising medium is rapidly becoming obsolete. Most advertisers want to NARROW-cast. We now live in an age in which a merchant selling widgets to 22-to-27-year-old Hispanic males can direct a message right to them. They don't have to pay the freight to "purchase" the ears of 18-to-34-year-old males just to reach their very narrow target...and one that is actively searching specifically for the product offered by the merchant, not just potentially being lost among the mass of listeners to a radio station.

Sad to see an icon, and once a member of the same group of stations for whom I worked, throw up their hands and pull the plug. But you will see more and more examples of stations with which we grew up go off the air. Many have already changed to niche formats or ride satellite programming that is of little interest to listeners (but it's cheap!) Some are mere excuses to have one of those low-power FM translator stations and that is not economically viable.

I stand by my prediction: the current AM broadcasting band will be a ham radio band within ten years. N4KC says that, but I am not happy about it.