An amazing piece of "kit"

That's what the Brits call ham radio gear..."kit."  And let me apologize right up front for two amateur radio blog posts in a row.  However, I think this one speaks well to the rapid technological change that is going on in the hobby.

I remember when I started out...way back when Marconi was spitting sparks off an energized bit of wire...a ham radio station usually consisted of a big transmitter--like a Viking Valiant or a Heath DX-100--and an even bigger receiver.  I had a Hammarlund HQ-180 and it was the size of a larger microwave oven.  Only the rare amateur radio operator dared put radios into his vehicle, and the thought of putting any kind of station into a pack and heading for portable operation was unheard of.

Things have changed dramatically.  I have a Yaesu FT-857D that is about the size of a cigar box and it, along with a tiny switching 12-volt power supply and a simple wire antenna, gets me on the air from anywhere there is AC.  And Yaesu makes a version of my radio that has a built-in battery pack that removes the necessity of AC altogether.  There are many other examples of very small, very advanced radios that can sit on the desk at home with a full set of features, be easily installed in the vehicle for mobile operating, or head for the campground or beach (or some emergency shelter somewhere). 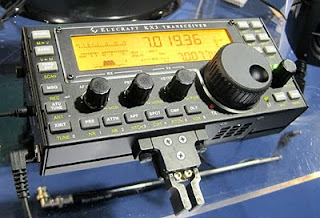 ﻿
Now, I have seen the most amazing bit of "kit" yet.  Elecraft, a company that has really created some elegant new gear that takes advantage of emerging technology, announced a transceiver at the Dayton Hamvention in Ohio last weekend.  The Elecraft KX3 is a truly remarkable slice of technology.  HERE is a demonstration of this thing.  I have no idea what the price will be, but I want one!

No, I want several!

(PS: Somebody wrote that if you just use the words Elecraft and KX3 in a blog, the search engine robots beat a path to your site.  We'll see!  Any of you robots interested in hooking up with a KX3?)
Posted by Don Keith N4KC at 9:01 PM 2 comments:

So, I do this blog dedicated to rapid technological change and its effect on society, media and my beloved hobby of amateur radio.  Seems I spend an inordinate amount of bandwidth on the "media" part, but that is where there has been the most fodder for blogs lately.  I suspect it shall remain so.  At least from my limited perspective, since that is where I make my living.

But I am pleased to report that technological innovation has finally come to my basement--right here in my office/ham shack.  After years of resisting it, I have finally succumbed to the lure of DIGITAL MODE communication!  My excuse has been a good one.  I spend ten to twelve hours a day on a keyboard...doing advertising and marketing stuff at the office and writing books here in the home office.  When I get ready for some ham radio operating, I don't necessarily want to go back to a keyboard yet again.  The available gear has also been very kludgy with lots of cables running about, tricky interfaces to radio gear, and devices that put a big strain on computers.

But a couple of things shoved me in the direction of such acronyms as PSK31 and RTTY.  One was the urging of some buddies (W9YNF, KW4J, and others) who sing the praises of the fun that is digital.  Another was the claim that I could work much DX with very low power.  And then I keep seeing rare countries pop up on the DX cluster spotting systems that are only working teletype or PSK31.

Then here comes a tiny little box that addresses my cables-everywhere worries.  It is a neat little device called a SignaLink USB, which offers the ability to easily and quickly link a computer to a ham radio receiver/transmitter using minimal cabling, and, obviously the USB port.  It does not get in the way of anything I might want to do on the computer or the radio, and simply plugs into a USB port on the 'puter and the accessory socket on my Kenwood TS-2000 radio.  It even contains its own sound card so it does not muck up anything on the computer while it decodes digital tones being transmitted by other stations and takes my own keyboard input and converts it to a long list of modes.  And hooking it up and getting it adjusted took a whopping fifteen minutes.  Downloading and figuring out one of the shareware software programs was a bit more of a challenge but nothing to really fuss about.

I must admit I am impressed so far.  I played with teletype back in the '70s when we had to use big, noisy, oily teletype machines and fairly frightening voltages to be able to print out stuff on fan-fold paper.  Tuning in a station was a real task and any nearby interfering station ruined any hope of a good chat.  The way it's done now is so far superior to that it is silly.

When I first tuned down to 14.070 megahertz on the 20-meter ham band, it sounded like a choir of banshees all screeching at once.  Or like punk rock.  But you know what's cool?  You don't have to listen at all.  You can turn down the volume and not hear anything at all when you use the accessory port on the radio.  The SignaLink gets its audio back there.  But how do you pull any intelligence out of all those stations, all basically on the same frequency at the same time, competing with each other?

Amazingly, it's easy.  The software (I'm using a free program called Digital Master) shows what is called a "waterfall."  It is a moving view, with each signal displayed as a little red/yellow trace making its way down the screen.  All I have to do is click on one of those traces and words start appearing in a text window above.  And it is guys chatting.  On Saturday night, there must have been a dozen traces at once, all perfectly readable.  Some are more yellow than red, indicating they are weaker, but I was able to print them even when they were almost invisible on the screen.

OK, so I decide to jump right in and answer a "CQ" (someone putting out a call looking for another station to talk with).  He came right back to my call and we had a nice, short contact.  And he was in Russia.  So were the next three stations I spoke with.  All came back to my initial call and all gave me "599," which is a very strong signal.  Oh, and by the way, I was putting out a mere 20 watts!  I was hooked!  And after 48 years in the hobby, I had "gone digital."

I'm still having trouble getting used to dropping in the pre-set information at the right time without messing up and sending the wrong thing, and I'm still learning which function keys do what with the software, but so far, it seems like a very nice way to chat.  I've talked with guys all over Europe so far on PSK31, and am soon going to play with this new-fangled version of radio teletype that promises to be so much better than that old oil-slinging, sprocket-throwing Kleinschmidt clunker I used back in the '70s.