That OTHER button on your radio 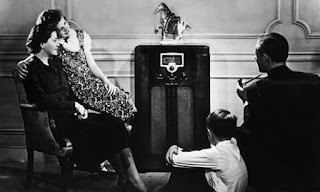 I have the pleasure of doing lunch most weeks with a great group of guys, most of whom are amateur radio operators, and some of whom are AM broadcast-band DXers.  That means they try to hear and log reception of distant radio stations on the AM broadcast portion of the radio spectrum.  They face many challenges these days, including a startlingly high level of electrical noise (generated by everything from power lines to high-def plasma TV sets), more and more stations broadcasting in languages other than English, weaker signals due to a lack of maintenance on the stations' transmitting plants, and the fact that many don't even bother to identify their call signs and station locations as required by law, or they illegally identify as the FM sister station they are simulcasting at the time.

The fact is that listenership to AM radio...once the only viable commercial band...is rapidly becoming non-existent.  (I remember putting an FM station on the air in the mid-1970s and giving away FM converters for AM car radios so we'd encourage people to tune in FM.)  Some of the radio-industry "trade" publications are quick to point out that several of the top-money-making stations in the country are AM stations.  True, but that is due to factors--mostly truly compelling programming and continuing to be important to a significant number of listeners--unrelated to their using a different technology to modulate their carriers. And those successful AM stations are absolutely the exception and not the rule.

The fact is, AM is dying.  I see an amazing number of AM broadcasters somehow finagling licenses for translator stations that put their AM station on a low-power FM frequency.  Others are finding their transmitter/tower sites more valuable as real estate than as radio stations and are simply turning in their licenses to the FCC and going "dark."  Or their billing is not enough to cover the power bill.  One of the major group owners has for years been systematically selling off their AMs for a song or, in most cases, giving them away to non-profit groups as tax write-offs.

Never mind that I think broadcast operators allowed this to happen by being total dunderheads.  When FM came along, they all moved their more compelling programming--and especially their music formats--to the better fidelity of that mode.  Like him or hate him, Rush Limbaugh almost single-handedly prolonged the viability of the AM stations by a decade with his unique brand of talk.  Now, though, Rush, news and sports talk, and ethnic programming is just as readily available on FM.  That same ever-present buzzing electrical noise along with the vagaries of night-time propagation and other factors that frustrate my AM-DXing buddies also discourage anyone from ever hitting that "AM" button on car radios.

But all that aside, the reason AM has deteroriated to almost no listenership in most cities is simply that there is nothing there worth listening to.  My oft-quoted consultant buddy, Mark Ramsey, just spoke to the subject HERE.

It all begs two questions:

1) Is AM merely the first domino to tip over, with FM inevitably toppling, too?  Is traditional, over-the-air broadcasting going away at some point?  There are plenty of other audio choices available to people on a variety of platforms that are becoming more and more ubiquitous, but will broadcasters answer the challenge by investing in programming content that people will still want to pull out of the mire?  Or will they continue to avoid investing money and creativity in the product for which people are searching...and successfully finding elsewhere?

2) How long before the AM broadcast band becomes an extension of the amateur radio 160-meter band?