Hate to say I told you so 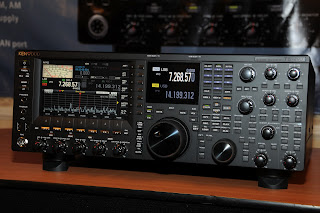 First: all the media news today is wrapped around the announcement by newspaper conglomerate Advance Media that their New Orleans Times-Picayune would soon cease publishing a print edition every day.  They will only throw a paper in Crescent City driveways on Wednesday, Friday and Sunday.  Otherwise, subscribers will have to get their news from their online "digital" edition, which will thoretically be updated constantly.

Told you so.  The economics and competitive landscape for traditional newspapers have long since been obsoleted, not just by technology buy how people expect to get their news.  Stay tuned.  This is only the first shot.  My hometown paper, The Birmingham News, also an Advance paper, announced today they and others in the group will do likewise beginning soon.  Prediction:  none of these entities will be publishing traditional newspapers--any day of the week--within two years.

Second item: amateur radio circles have been all atwitter about the introduction this week of a new transceiver from Kenwood, their TS-990S.  Not really "introduction."  They had a non-working prototype for view at the massive Dayton Hamvention last week.  Kenwood is not talking much, for good reasons.  Some features are not yet set.  And they have patents pending on some things they would prefer remaining quiet about.  But that has not stopped rampant (and often ludicrous) speculation.  It's fun, though.  Plus it is a vote by a major manufacturer that the hobby will continue to grow and be vibrant.

I had told you earlier that new technology in the manufacture of ham radio gear would reinvigorate the market, and with it, the hobby.  Here's proof.  The fact that both QST and CQ Magazine, the hobby's two major publications, are now offering digital editions is another example of how ham radio continues to do its best to keep up with how potential hams expect their hobby to evolve.

I am.  Having problems, that is.  Editing this post is almost impossible, and I had to add that huge image of the Kenwood TS-990S just to get a cursor in the edit box.  I still can't go back with the mouse and put the cursor anywhere else in the post, not can I copy the text.  I just hope Google is not throwing its weight around.  I don't mind downloading and using Chrome.

But don't force me.  I don't respond well to intimidation.  Give me some reasons, Google, and I will be glad to consider it.  But don't tell me you are going to make it impossible for me to continue a blog I have been using for years just so you can force me to devote even more of my computer's hard drive to Google.

UPDATE:  Yes, indeed.  When I downloaded and installed Chrome, my blog posting page works beautifully.  Please, Mr. Google, explain to me why you would disenfranchise all users of the latest version of what is still--in many analytic reports--the number one web browser?  Because you can?  It worked.  I downloaded your damn browser.  And I guess I'll see if I want to use it instead of IE9.  But I won't enjoy it.  So there.

Followers of this blog may remember a while back when I ranted and raved about the creation of the new Consumer Fraud Protection Bureau, thanks to those caring and concerned Congressmen Dodd and Frank.  (I won't even launch into my belief that at least one of those guys was instrumental in creating the housing crisis in 2008 with his incessant and ill-conceived meddling.)  I noted in that diatribe my concern that this new government watchdog agency had already added over 800 employees, just since November 2011.  And that it was created despite the fact that many, many federal and state agencies already exist to do exactly what this new one was supposedly chartered to do.

Well, they apparently aren't satisfied with duplicating the existing agencies that are supposed to be enforcing existing laws as they apply to financial institutions.  Now CFPB is grabbing some more responsibility, taking on an even broader role in regulating consumer credit.  They have taken it upon themselves to regulate the workforce diversity of the entities they now oversee.  Hey, I'm all for diversity.  I am practically a radical when it comes to diversity, fair and equal treatment, and a lack of discrimination.

But where in the rather foggy legislation that created this boondoggle does it give them the right to investigate the hiring diversity of banks and credit unions?  And even if it did, are there not plenty of other government agencies whose job it is to do this very thing?

Portions of an article from THE HILL on the subject:

The Consumer Financial Protection Bureau (CFPB) is casting a gaze at the diversity of the workforce at the firms it monitors, thanks to a new hire.  Stuart Ishimaru was unveiled Monday as the CFPB's first head of its Office of Minority and Women Inclusion, which is charged with monitoring the diversity policies of not only the agency itself, but also the firms the bureau regulates.

"Americans from all walks of life use consumer financial products and services. We should strive to reflect that diversity because, in the end, it will only strengthen the work we do,” said CFPB Director Richard Cordray in a statement. “Mr. Ishimaru’s extensive experience in promoting diversity makes him the perfect person for the job.”

In addition to making sure financial institutions are selling consumer products that are easily understood and cracking down on abusive products, the new office means the bureau also will be monitoring the diversity policies of those businesses.  The CFPB established the position thanks to a provision in the Dodd-Frank financial reform law — which also created the bureau — that requires all financial services agencies to establish similar offices. The provision was authored by Rep. Maxine Waters (D-Calif.), the second-ranking Democrat on the House Financial Services Committee.


In addition to evaluating the diversity policies of banks, credit card companies and mortgage providers, among others, Ishimaru is also charged with ensuring the diversity of the CFPB's workforce and that of the businesses that participate in agency programs and contracts.

Again, I am all for fairness and diversity.  But do we need another multi-million-dollar tangle of hopeless bureaucracy and waste to get it?  Or do we just make sure existing agencies are doing what we are paying them to do already?

Answer me that.  Please!