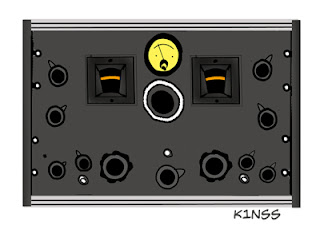 Look, I'll be the first to admit that amateur radio is not a hobby for everyone.  I even wrote an article about the subject for the eHam.net web site.  But for a bunch of us--and we are not all nerds, geeks, or sparks-for-brains--the hobby offers a lot.

Some love it for the technical aspect, and the hobby continues to lead the way with new and innovative ways to involve computers, wi-fi, and the Internet with our radios.  (My own things are antennas and propagation, and with the unusual nature of sunspot cycle 24 and how it affects us all in more ways than most folks know, it is a fascinating time for us solar flux watchers!)

Others like radiosport, using their "rigs" in active competition with other hams around the world in contests or chasing operators in rare, exotic places.  (I am a casual contester, too, since it is a good way to learn more about propagation and how my homebrew aerials perform...plus it is just a lot of fun!  There is a group of hams about to set up and operate on Spratley Island...bet you never heard of it.  And I talked to a station operating from the Japanese exploration base in Antarctica the other day.  Heck, you can even talk to the International Space Station as it orbits above earth.)

Still others like helping out in emergency situations, and perform valuable public service.  A lot of us simply enjoy chatting with like-minded people around the planet.  (I had an enjoyable conversation ["QSO"] with a fellow in Latvia yesterday, and exchanged signal reports with guys in Namibia, French Polynesia, Latvia, European Russia...and Nashville, Tennessee...just in the last few days.)

Here's a great video of a ham in Melbourne, Australia, showing us his set-up in a park in the city where he just likes to go operate for a while, using solar power and a simple radio station.  You can hear the joy in his voice!

Okay.  Enough selling.  If you are interested...click here for more info on the hobby.

That picture of me

I have a photo I use on my web sites and even here on this blog.  It was taken about ten years ago by a photographer from a local daily newspaper (like so many daily papers, it is now defunct) for an article they were doing on me.  When my book editor at St. Martin's Press saw the photo, he said, "That's a good shot.  You should use it as your publicity photo." 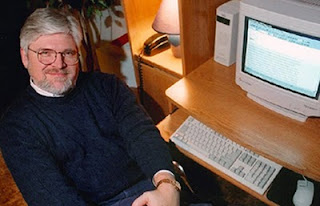 Bob Wyatt was seldom wrong so I did.  And now, as I am on the verge of having my daughter-in-law, who is a good photographer, take some new pictures for that use, I am reminded of a telling exchange I had recently with a young person regarding the photo.  An exchange that fits the theme of this blog exactly.

"Don, what is that thing in the picture?" he asked.

Thinking he meant the "old-fashioned" CRT monitor, those big monsters that you can't even give away anymore at garage sales.  I told him.

"Oh, the mouse," I said.  "There was a time when mice had cords that actually plugged into the computer."

"No, not that," he persevered.  "I mean that black thing over there next to the lamp.  The thing with the twisty cord on it."

Then I realized he was talking about my desk phone.  I tried to explain to him that telephones once had cords that not only ran between the headset and the main part of the 'phone, but had to plug into something in the wall, too.  You couldn't walk all around the house talking because you couldn't get any farther away from the phone itself than the "twisty cord" could reach.

He blinked a few times and finally said, "Yeah, I think my grandma had one of those one time."  I didn't even try to describe rotary dials and such arcane stuff as that.  And I also resisted the impuse to ask him if he was familiar with phone booths.

Do you realize how many people do not even have landline telephones at home anymore?  And will never know about cords, wall plugs, long-distance charges, party lines, telephones without video screens and apps...

Similar thing hit me just yesterday.  A group of us were talking about what our kids and grandkids got for Christmas (my darling Alexa got a Barnes & Noble Nook, bless her heart) and one fellow said his kid got a CD.  A CD album, with songs on it.  She had no idea what it was.  And then Dad realized the only things they had that would play it was their BluRay player or their computer.  Finally, it dawned on them--on the kid first and then her old man--that she needed to get on the computer and put the tracks she wanted into her iTunes folder so she could download them to her iPod.

Have you tried to describe a 33-and-a-third record album or a 45 RPM record to anyone under 30?  Of dragging a needle through a groove on a piece of plastic and amplifying the resulting vibrations as a way of playing music?

Of having to buy a whole album of bad songs to get the one or two that you really wanted to own?

Save your breath for talking on the telephone.